The summation of an explicit sequence denoted as a succession of summations like $a_1+a_2+\cdots+a_n$ can be written in the delimited form $\sum_{k=1}^na_k$. Here, $a_k$ is called the summand, and $k$ is an index variable said to be bound to the summation. Summations can also be written in the general form like $\sum_{1\leq k\leq n}a_k$, making it easier for manipulations such as substitution of index variables.

There’s a neat relation between sums and recurrences. A sum like

is equivalent to the recurrence

Therefore we can evaluate a sum using methods of solving recurrences, such as the repertoire method we’ve learnt in Chapter 1.

To evaluate sums in closed form or to simplify sums, the key to success is the ability to change one summation into another under a few rules.

Let $K$ be any finite set of integers. Sums over the elements of $K$ can be transformed by using these three rules:

The commutative law allows us to reorder terms. Here $p(k)$ is any permutation of the set of all integers. Actually, it’s a special case of a more generalized rule:

Suppose there’s an arbitrary function $f:J\to K$ that takes an integer $j\in J$ into an integer $k\in K$. The formula is

It might be hard to understand at the first sight. But imagine that all items spread within a table like the one here: 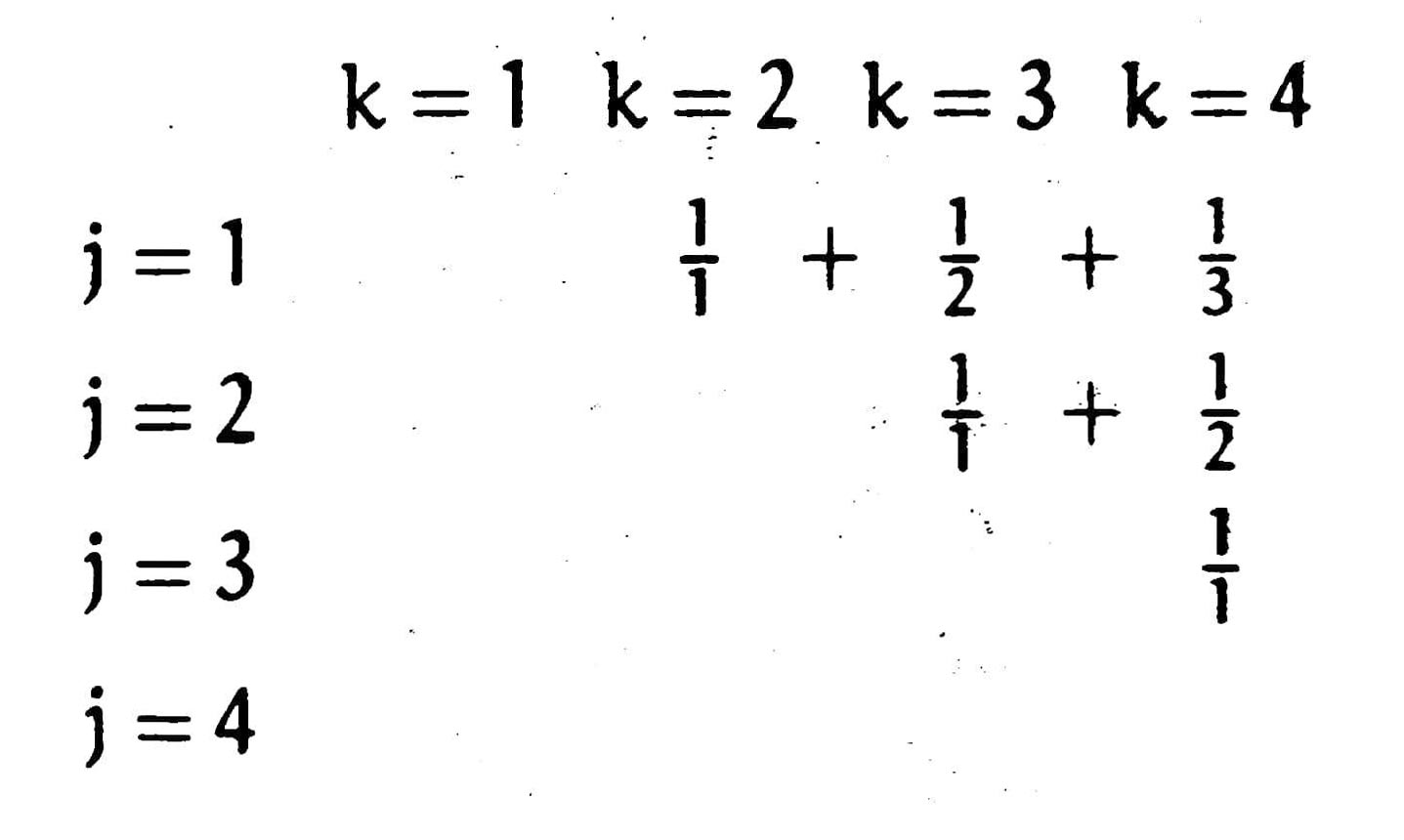 Method 0 is to look up. The authors suggested a few huge books for manual look ups. Fortunately, the on-line database OEIS is available; it is a more suitable tool than books for such knowledge.

Method 1 is guessing then proving. Since guessing needs flashes of inspiration, this method do not always work, and proving should in fact be a complement for other methods that establish sums from scratch.

Method 2 is the perturbation method. Perturb the sum a bit, then find relations between the perturbed sum and the original sum.

Method 3 is the repertoire method. This method still needs intuition to determine what form the recursion should be.

Method 4 uses infinite calculus to approximate the sum, then use other methods to compensate for the error terms.

Method 5 is to clever rewrite of the original sum. This method requires even more intuition than the repertoire method does. Expand a single sum to multiple sums to simplify the summand.

Method 6 is the topic of the next section.

Method 7 will be introduced in later chapters.

Just like in calculus, we need a huge repertoire to evaluate sums effectively. Here are some useful formulas:

This rule is useful when $\sum{\rm E}v\Delta u$ is easier to evaluate than the original one.

In this section, we proved the validity of the three basic laws for absolutely convergent sums. Make sure the sum converges absolutely before applying these rules.